Center for Global Understanding and Peacemaking 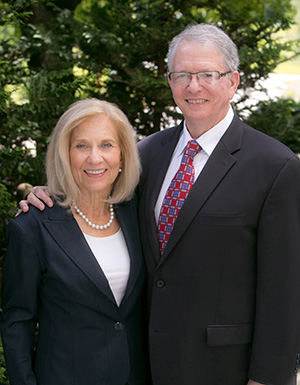 Mrs. Ware earned her bachelor’s degree in elementary education from Elizabethtown College in 1968, has studied painting with Sam Feinstein in Philadelphia, and has taken graduate courses at the University of Virginia and Millersville University. She retired in 1997 as an art teacher from Lancaster Country Day School, which honored her service by naming her as a fellow in May 2002 and an honorary alumna in October 2005.

Paul W. Ware is president and chairman of the board of directors of the Ferree Foundation and chairman-retired of Penn Fuel Gas Inc. He also is director of Emerald Asset Management Inc. Mr. Ware has served on several gas and water utility company boards. He also served as a long term trustee at his alma mater, Franklin & Marshall College.

Mr. Ware serves as board president of the World of Scouting Museum and remains active with the Boy Scouts of America, serving on the board of the Pennsylvania Dutch Council and as a vice president of the Northeast Region Area 6 Committee. Mr. Ware gives his time to St. James Episcopal Church and is an advisor to LancasterHistory.org—Lancaster County’s Historical Society and President James Buchanan’s Wheatland, Lancaster Symphony Orchestra Advisory Council, Franklin & Marshall College and Millersville University. His efforts have been recognized with a variety of awards and honors from local, state and national charities.

The Ware Center in downtown Lancaster was named by Millersville University to recognize the Wares’ commitments to the visual and performing arts. The Wares were the honored recipients of the “Spirit of Philanthropy Award” from Central Penn Business Journal’s 2012 Business of the Year Awards.