Elizabethtown College graduates are successful. Directly after graduation, 100 percent of students are employed, attending graduate or professional school, or embarking on an internship or service.

Below we share data from the Class of 2010 Graduate Report. We share pre- and post-graduation activity and our methodology. Also you will find links to our academic department websites, which house information related to specific disciplines.

According to the National Association of Colleges and Employers (NACE), 2010 graduates faced some challenges due to unsettled national and international economic conditions. Still, NACE saw reasons for cautious optimism as employers projected slight increases in new hires in 2010 compared to the previous year.

In general, college graduates continue to enter the job force from a position of strength: the average salary offer to 2010 college grads was $48,351 nationally. Compared with their peers without a college degree, graduates can expect to accrue roughly one million dollars more in lifetime earnings. Elizabethtown College graduates can feel confident that they have made a wise investment in their future and their Elizabethtown degree will serve them well in the years to come 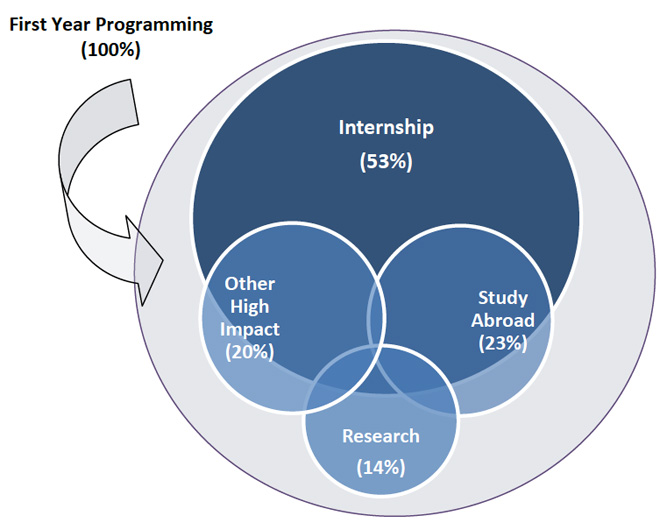 ALL students participate in high impact first-year programming including a seminar, advising, orientation, and mentoring. In addition, 4 out of every 5 members (80%) of the class of 2010 engaged in intense learning activities while at Elizabethtown College, connecting their classroom learning to the “real world.”  As illustrated, at least half of all graduates completed a transcripted internship, 23% studied abroad, 14% engaged in research with a faculty mentor, and at least 20% experienced another type of high impact learning opportunity such as designing an engineering project, directing a play, studying in Washington DC for a semester, participating in Mock Trial for a semester or more, or completing an Honors project in their major. These activities appear on the students’ transcripts, demonstrating to employers and others the rich knowledge and experience that distinguish an Elizabethtown College education. NACE reports that college students who have completed internships are more likely to receive and accept job offers and begin their employment at higher salary levels than students who have not experienced such high impact learning.

Note: The percentages above do not total 100% because some students engaged in multiple high impact learning activities. This chart captures the 80% of the class whose high impact learning appears on their official transcript. Students not in this 80% may have had similar experiences that were not, for a variety of reasons, officially registered 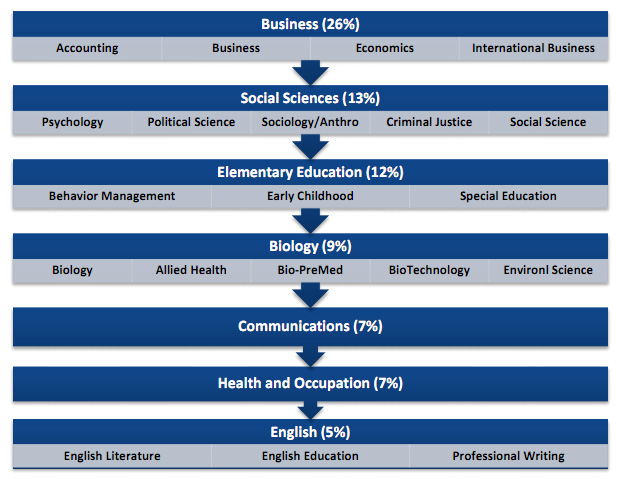 Of the graduates with known status: 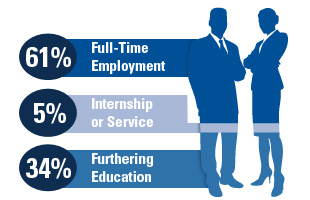 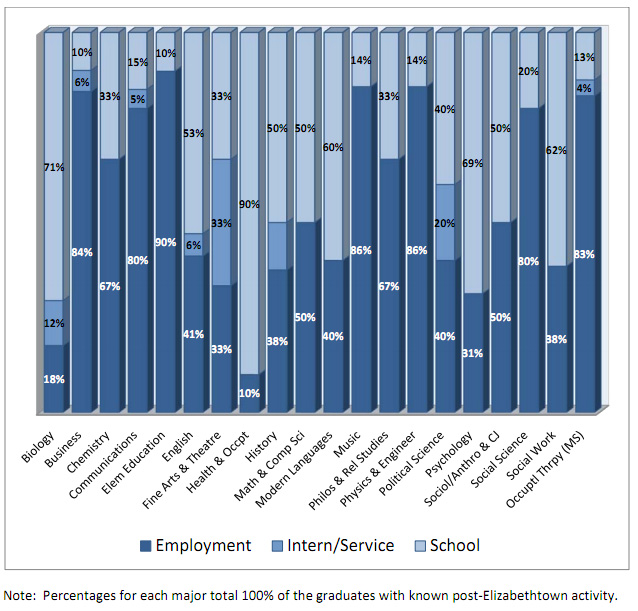 This report includes Elizabethtown College graduates from the traditional residential program who earned a degree at one of the 2010 conferrals: January, May, and August. A total of 450 bachelor’s degrees and 29 master’s degrees were awarded from the traditional college in 2010. Information for this survey was collected by the Office of Career Services through multiple sources. Students provided preliminary information on a survey distributed at graduation  rehearsal in May. They were additionally surveyed by email approximately one year post-graduation. Where possible, follow-up contact was made with those students who did not  respond to the emailed survey. In addition, academic departments and the Alumni Office were  asked to provide any known information about members of the class of 2010. Data on internships, research, study abroad, and other activities during college were provided by the Office of Registration and Records. Graduate and professional school enrollments were confirmed using data from the National Student Clearinghouse.

Through this process, responses were collected from 76% of the class of 2010. After noting the pre-graduation activity of all 2010 graduates, the remainder of the information in this report pertains to the 76% of graduates for whom we have reliable post-graduation data.