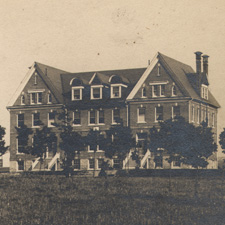 Elizabethtown College was chartered in 1899 by members of the Church of the Brethren who were interested in establishing an institution of higher education for their denomination in eastern Pennsylvania.

As expressed by the founders in the charter, the purpose of the College was "to give such harmonious development to the physical, mental, and moral powers of both sexes as will best fit them for the duties of life and promote their spiritual interests." While expressed in different words, the purpose of the College today still embodies the essence of this educational philosophy.

The Commonwealth of Pennsylvania granted a charter on September 23, 1899. Classes were held for the first time the following year. During its early years, limited enrollment and finances hampered the general development of the institution.

Supported initially by contributions from individual churchmen, the College in time became the responsibility of the Eastern (now the Atlantic Northeast) and Southern District of Pennsylvania of the Church of the Brethren. The Church Districts officially assumed the responsibility for operating the College in January 1919. With the advancing years, the College grew in the size of its enrollment, the extent of its physical facilities, and the quality of its academic program.

Formal accreditation was granted in 1921 by the Pennsylvania Department of Public Instruction and in 1948 by the Middle States Association of Colleges and Secondary Schools. The rate of growth increased significantly from the end of the Second World War. Student enrollment has more than quadrupled since that time. The academic program has been expanded and is continually revised to meet changing needs of students.

Our Church of the Brethren Heritage

Founded by the Church of the Brethren, Elizabethtown unhesitatingly supports the free expression of religion for all individuals and groups. In addition, the College is committed to providing an environment that affirms human differences and similarities by encouraging students to examine, recognize and promote diversity related to national origin, religion, race/ethnicity, gender, disability, sexual orientation, age and socioeconomic status.

In 1993, the Church of the Brethren relinquished its governance role at the College. Since then, Elizabethtown has been governed by an independent Board of Trustees. The College's bylaws call for eight of 42 Board positions to be Church of the Brethren members. They are elected by the Board, not the church. Three church executives serve ex officio without vote.

The campus community takes pride in the fact that its foundational values have become embedded in the life of the College. The commitment to peace, non-violence, social justice and human dignity are manifest in the Center for Global Understanding and Peacemaking, the Ware Colloquium on Peacemaking and Global Citizenship, the Young Center for Anabaptist and Pietist Studies, and the increased emphasis on study abroad, civic engagement, and peace and justice.

Launched in 2004, the Center for Global Understanding and Peacemaking focuses on international programs, peacemaking and civic engagement. Every year, the Center supports more than 100 students who study abroad, 45 international students who take classes at Elizabethtown, and more than 1,200 students engaged in service and outreach locally, nationally and internationally. Through these experiences, it provides opportunities for students to interact with cultures and peoples different from their own while they develop a sense of their responsibilities as global citizens.

The Center for Global Understanding and Peacemaking presents programming associated with the Ware Colloquium on Peacemaking and Global Citizenship. The annual Ware Lecture on Peacemaking—a highlight of the Ware Colloquium—brings notable speakers to campus. In past years, the lecture has been presented by Mary Robinson, the first woman president of Ireland and former U.N. high commissioner for human rights; F.W. de Klerk, Nobel Prize recipient and former president of South Africa; Jody Williams, Nobel Prize recipient and chair of the International Campaign to Ban Landmines; and Terry Waite, former hostage negotiator and cofounder of Y Care International and Hostage UK.

The Young Center for Anabaptist and Pietist Studies, named for Dr. Galen S. and Jessie M. Young, is an internationally recognized scholarly research institute that fosters contemporary and historical investigations of Anabaptism and Pietism, the theological traditions from which the Church of the Brethren developed. The Center seeks to interpret the cultural and religious heritage of groups emerging from these movements through exhibits, public lectures, workshops and conferences. The Center's staff regularly teaches undergraduate courses, offers occasional public lectures and directs research projects. Its Fellows Program supports junior and senior scholars and graduate students on leave from other institutions.