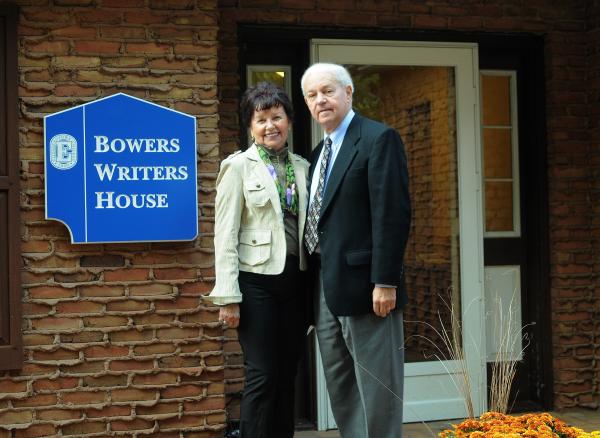 Kenneth L. Bowers '59 and Rosalie Erb Bowers '58 met on campus in 1955, earned bachelor’s degrees here and married in 1960. Early in their careers they were high school teachers for several years. Rosalie taught English and Spanish. Ken taught English and journalism. After graduating Elizabethtown, they earned master’s degrees, Rosalie an M.S. in Library Science at Drexel University, and Ken an M.A. in Communications at Penn State University.

From 1961 to 1967 they were back at Elizabethtown College, where Ken served in public relations and Rosalie was a librarian. Ken also taught journalism and Rosalie taught Spanish.

Ken then joined the Public Relations Department at AT & T in New York, and Rosalie was a librarian at Upsala College in New Jersey. In 1970 they returned to south-central Pennsylvania. Ken ultimately retired as vice president of corporate communications at Hershey Foods Corporation, and Rosalie retired as assistant corporate secretary at Pennsylvania Blue Shield.

Throughout their careers their loyalty, commitment and belief in the College’s mission and philosophy remained strong. Ken served actively on the Elizabethtown College Board of Trustees for 25 years. He was its Chairman for three of those years, and in 2008 he was award emeritus status. In 1999 the College bestowed upon him the degree of Doctor of Commercial Science, Honoris Causa.

Ken and Rosalie have given generously to various community and philanthropic organizations. We are grateful for their devotion and dedication to Elizabethtown College.