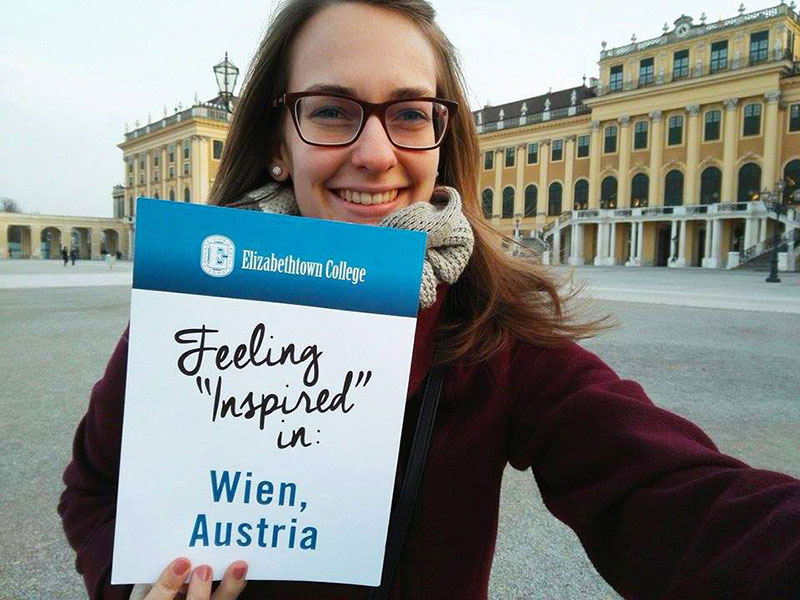 "Study abroad has had such a strong impact on my life that I decided to step out of my familiar world and live and work in Vienna, Austria. I can only hope that more students take time out of their busy schedules and familiar worlds to participate in the numerous, amazing programs offered at Etown to not only enhance their education in many ways, but also to contribute to their personal growth."

Pictured against the imperial backdrop of Vienna's Schönbrunn Palace, Devoney is a recent German major who lives in the Austrian capital, where she works part-time for BCA (Brethren Colleges Abroad).

Spoken in Austria, Switzerland as well as Germany, German not only has the largest number of native speakers in Europe (over 120 million), but is also the language of world-renowned musicians, writers, thinkers, scientists, and technological innovators: Mozart & Beethoven; Clara Schumann & Marlene Dietrich; The Brothers Grimm; Goethe & Kafka; Luther & Marx; Einstein & Freud; Diesel & Daimler.

Moreover, Germany is an economic powerhouse: It has the largest economy in Europe and is one of the world’s biggest exporters. Over 1,100 subsidiaries of German companies operate in the U.S. alone.

The Department of Modern Languages offers students a German Minor

As studies show, the acquisition of a second language not only improves your overall performance in college, but also yields life-long cognitive benefits. The German language is the gateway to a rich culture, which we explore in each one of our German classes at Etown.

You are strongly encouraged to use the resources at the Young Center, the College’s internationally known research institute for the study of the Pennsylvania-German speaking ("Dutch") Amish and other Anabaptist communities, which frequently hosts visiting German-speaking scholars. Some German minors study in a German-speaking country, either at study abroad sites in historic Vienna and picturesque Marburg—where the Grimms first developed their interest in folklore—or other faculty-approved study abroad programs.

All German minors become members of the student-run German Klub, which arranges off-campus excursions, screens German-language movies etc. At the bi-weekly German Table (Stammtisch) you’ll socialize with other students and faculty, mostly in German, to continue to develop your proficiency.

Open up exciting new opportunities for yourself

The German program is flexible: We welcome minors from all majors. Graduating with a German minor has enabled some of our recent students to win prestigious scholarships, including Fulbright, or gain admission to top-ranked graduate schools such as the University of Wisconsin (Madison) and University of Texas (Austin). Other graduates pursue a surprisingly broad range of careers such as: executive with a pharmaceutical company in Germany; college professor; high-school German teacher; positions with—often German-American—corporations, non-profit agencies, and educational foundations.

Interested in seeing what Etown has to offer you? Visit our campus! You'll be able to sit in on classes, meet with current students and faculty and take a tour of our 200+ acre campus! We look forward to hearing from you.
Elizabethtown College