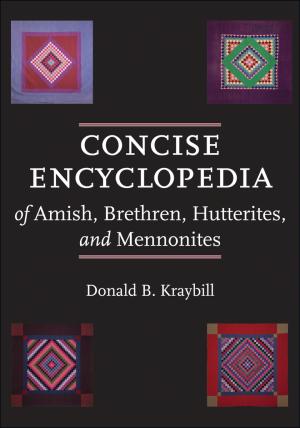 Concise Encyclopedia focuses on the more than 200 different 21st-century Anabaptist groups in North America. The 340 short entries provide a succinct overview of the history, religious beliefs, and cultural practices of these groups, which are found in 17 North American countries.

“An excellent guide to the complex world of Anabaptist groups.”
—Royden Loewen, Chair in Mennonite Studies, University of Winnipeg

Q&A With Author Donald B. Kraybill

Q: Why did you compile such a book?
A: I thought we needed a single book to provide both a broad overview and a short and concise introduction to all the Anabaptist groups in North America. Many people don’t realize how many different groups there are, how diverse they are, and where they are located. So I wrote Concise Encyclopedia as a single one-stop source for journalists, students, scholars, and others interested in learning about the Anabaptists of North America.

Q: Why did you write all the entries yourself?
A: It's true that the essays in many encyclopedias have contributions by individual specialists. This volume is unique because I wanted it to be very concise and so I wrote short overview essays. By writing them myself, I could keep the style, content, and tone uniform. In some ways doing it this way complicated the process because I had to master so much information. On the other hand, it made it easier because I didn’t have to work with dozens of other people!

Q: How do you decide which groups to include?
A: Well, there are four major Anabaptist tribes: Amish, Brethren, Hutterites, and Mennonites. All of them, in one way or another, trace their roots to the Anabaptist Movement at the time of the Reformation in 16th-century Europe. So that was a pretty easy choice. However, inside those tribes or groups, there are many subgroups. Occasionally it was difficult to decide whether or not a subgroup should be included or excluded. I used four criteria: if the group used one of the four group names (e.g., “Amish”) in the name of their group; if in its own literature the group described itself as “Anabaptist”; if the group was listed in a directory of Anabaptist churches; and if the group identified itself with a network or fellowship of Anabaptist-related churches.

Q: Who are Anabaptists?
A: At the time of the Protestant Reformation, they were a small left-wing movement that argued for and practiced adult baptism, sometimes called “believers baptism.” Adult baptism was heresy, punishable by death. The deeper issue at stake was the now-taken-for-granted issue of the separation of church and state. The Anabaptists argued that the church should be free from state authority and have the right to determine its own beliefs and practices. Because these rebels had already been baptized as infants they were nicknamed “Anabaptists” (i.e., rebaptizers) by their opponents. Contemporary religious groups such as the Amish and Mennonites, who trace their religious lineage to this theological heritage, are known as Anabaptists.

Q: How many groups are covered in the book?
A: A total of 205. We created a directory of groups at the back of the book that lists all of them and their location by affiliation and country in North America.

Q: So how many Anabaptists are there in North America?
A: I identified 8,711 congregations and 809,845 baptized adult members. It was impossible to make reasonable estimates of population (adults and children) because most of the groups report the number of baptized members, not their total population. My best estimate is that the total Anabaptist population in North America is about 1.3 million.

Q: What are the boundaries of North America?
A : When I began the project I focused on the United States and Canada. I soon discovered that North America also includes the Caribbean territories and countries, Central America, and Mexico. It’s actually a total of 23 countries! I found Anabaptist groups in 17 of the 23 countries.

Q: How many of these countries have Amish churches?
A: The Amish are only found in United States and Canada. To be exact, they are in 28 states and in Ontario.

Q: How did you distinguish between traditional and assimilated Anabaptist groups?
A: Well, members of some groups, such as the Old Colony Mennonites and the Old Order Amish, are very traditional. But other groups are very change-minded and actively participate in mainstream society whether in Mexico, Canada, or the United States. Members of these churches engage in political affairs, attend college, hold professional jobs, and use technology. I make a distinction between two broad categories: traditional and assimilated. It is best to think of a spectrum or a continuum from a tradition-oriented way of life to a change/progressive mindset.

Q: So what are the key aspects of that continuum?
A: The two key components are these: How separated the group is from the larger culture and whether the primary moral authority is invested in the group or given to the individual. In short, it’s about separatism and individualism. I see dress as the key indicator of where a group stands on the continuum. Churches that require a prescribed dress code for their members lean toward the traditional pole of the spectrum because dress signals a sharp separatist boundary with the larger culture and individuals are willing to give up their right to dress as they please and to follow the moral guidelines of the church.

Q: How do Old Colony Mennonites differ from the Old Order Amish?
A: The Old Colony Mennonites have a Dutch-Russian ethnic background. They emigrated from Russia to Canada in the late 19th century and then in the early 20th century from Canada to Mexico. In recent years some of them have moved back to Canada and to some areas of the United States. Historically, they have been extremely traditional, even more so than the Old Order Amish. Some of the Old Colony Mennonites are still very tradition oriented but others are in various stages of assimilation into the larger culture. The Amish, by contrast, come from a South German-Swiss background. Some Amish groups in the United States have sent schoolteachers to Mexico to help upgrade the quality of education in Old Colony Mennonite schools.

Q: How did you decide which topics to include?
A: That was actually quite difficult. Is the beard important enough to merit its own entry? Does anyone really care about beards? What about prayer? It’s an important element of the religious life of these communities, but what should be said about it? What about quilts, television, iPods? The list of prospective entries could easily rocket into the thousands. I ended up with about 350 and I’m pretty pleased with the selection at this point.

Q: So what are some examples of the entries?
A: Well, if we take an ABC approach, the list would include some of these: abortion, agriculture, alcohol, Asian-American Anabaptists, automobile, baptism, beard, Central America, cinema, cookbooks, dancing, and, yes, the holy kiss!

Q: Which entry did you find most interesting and/or surprising?
A: I must confess the biggest surprise I discovered was that there are Mennonites in the Bahamas! They are purportedly doing mission work, but I haven’t done any fieldwork there to determine the accuracy of their claims! I think another surprise for me was that there are some 256,000 Pennsylvania German dialect speakers in North America. This includes adults and children, but it adds up to a quarter million people speaking this unique dialect at their breakfast tables every morning.

Q: How did you gather the information?
A: The Young Center, where I work, gathers demographic and population information on Anabaptist groups in United States and Canada from a variety of sources: church directories, publications of the groups, and leaders and informants in many of the groups. My biggest challenge was gathering information on churches in the Caribbean, Central America, and Mexico. It’s been nearly 40 years since I have visited Central America and so I gathered that information by e-mail, telephone, and personal contacts. It also complicated the writing process because many members of the Central American, Caribbean, and Mexican churches have Hispanic or indigenous backgrounds and speak a variety of languages. So the expansion beyond the borders of Canada and United States made the project quite challenging!

Q: Did you include photographs?
A: Some people thought we should include them. But when you have 200 groups how do you adequately represent all of these groups in photographs? If you don’t have a photograph for each group and focus just on Amish and Hutterites, the presentation tends to be biased towards that particular group. So in the end we decided not to include any photographs. But we do have numerous tables, maps, charts, and lists of resources related to organizations such as Anabaptist-related colleges, publishers, and information centers. We also have an extensive list of references for additional research at the end. I wanted the encyclopedia to be a user-friendly and helpful portal into the complexity of the North American Anabaptist world.

An extensive research project completed recently by the Young Center of Elizabethtown College identified 8,711 congregations affiliated with Amish, Brethren, Hutterites, and Mennonites in North America. These four religious traditions emerged from the Anabaptist movement at the time of the Protestant Reformation in sixteenth-century Europe.

Researchers found Anabaptist communities located in 17 of the 23 countries in North America. Even the Bahamas claim a congregation founded by the conservative Eastern Mennonite Church. The United States is home to the lion’s share (71%), followed by Canada with 18%. About 5% live in Central American countries, 4% in Mexico, and 2% in Caribbean countries.

The total membership of baptized adults is 809, 800. Counting children and adults, the researchers estimate the total Anabaptist North American population at about 1.3 million. The population includes members of Dutch-Russian or Swiss-German descent who trace their ancestry back to European Anabaptism, as well as members with Hispanic, Asian, Native American, African or other national and ethnic lineages, who have come to Anabaptism more recently.

The Anabaptist presence in Central America, Mexico, and the Caribbean grew through outreach from churches in the United States and Canada since 1950. In addition a large number of traditional Old Colony Mennonites migrated from Canada to Mexico in the 1920s to establish colonies. In recent years some members of these groups have returned to Canada and the United States.

Mennonites account for nearly two-thirds (63%) of the North American Anabaptist baptized membership. They are followed by Brethren groups with 22%. The Amish claim 13% and the Hutterites 2%.

The research team found some 60 different Mennonite church groups in the United States ranging from horse-and-buggy-driving Mennonites to those that are assimilated into mainstream society and embrace higher education and advanced technology as well as mission and social justice activities.

The Hutterites, who practice economic communalism and reject private property, are organized into four different groups with a total of 450 communities, two-thirds of which are in Canada (the remaining third are in the United States).

The Brethren, who originated in Germany in 1708 and have indirect ties to Anabaptism, have 15 different church groups, the bulk of which are located in the United States east of the Mississippi. A few of these groups continue to wear plain clothing, but the majority has assimilated into mainstream culture.

The horse-and-buggy-driving Amish have about 40 subgroups and 1,825 local congregations, mostly located east of the Mississippi.

The study distinguished between tradition-oriented groups, whose members wear plain dress, are cautious about higher education, and espouse a simple, rural lifestyle, and assimilated groups, whose members participate more readily in mainstream society. Plain dress is a key indicator of where a group stands on the tradition-to-assimilation continuum, because it signals the church’s authority over individuals and a visible separation from the larger society.

The researchers found that approximately 256,000 children and adults in the traditional groups speak the Pennsylvania German dialect and use it in their church services.

The results of the study appear in Concise Encyclopedia of Amish, Brethren, Hutterites, and Mennonites, recently released by the Johns Hopkins University Press.