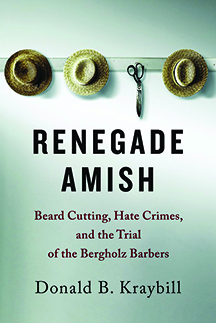 Donald B. Kraybill, distinguished college professor and senior fellow at the Young Center, has spent decades researching Amish life. In the spring of 2012, he was contracted by the United States Department of Justice, which was prosecuting sixteen members of a maverick Amish community for five attacks on Amish people in eastern Ohio. In addition to helping the prosecution understand Amish beliefs and practices, he served as an expert witness that September, testifying during the three-week federal trial in Cleveland. Renegade Amish, Kraybill's book about the Bergholz group and the trial, was published in September 2014 by the Johns Hopkins University Press.

On the night of September 6, 2011, terror called at the Amish home of the Millers. Answering a late-night knock from what appeared to be an Amish neighbor, Mrs. Miller opened the door to her five estranged adult sons and one daughter, along with their spouses. It wasn’t a friendly visit. Within moments, the men, wearing miner’s headlamps, had pulled their frightened father out of bed, pinned him into a chair, and—ignoring his tearful protests—sheared his hair and beard, leaving him razor-burned and bloodied. The women then turned on Mrs. Miller, yanking her prayer cap from her head and shredding it before cutting off her waist-long hair. About twenty minutes later, the attackers fled into the darkness, taking the hair of their parents as a trophy for their community.

Four similar beard-cutting attacks followed, disfiguring nine victims and generating a tsunami of media coverage. While pundits and late night talk shows made light of the attacks and poked fun at the Amish way of life, FBI investigators gathered evidence about troubling activities in a maverick Amish community near Bergholz, Ohio—and the volatile behavior of its leader, Bishop Samuel Mullet.

Ten men and six women from the Bergholz community were arrested and found guilty a year later of 87 felony charges involving conspiracy, lying, and obstructing justice. In a precedent-setting decision, all the defendants including Bishop Mullet and his two ministers—were convicted of federal hate crimes. It was the first time since the 2009 passage of the Hate Crimes Prevention Act that assailants had been found guilty for religiously motivated hate crimes within the same faith community.

Renegade Amish tells the story of the Bergholz barbers: the attacks, the investigation, the trial, and the aftermath. Informed by trial transcripts and his interviews of ex-Bergholz Amish, relatives of Bishop Mullet, victims of the attacks, Amish leaders, and the jury foreman, Kraybill delves into the factors that transformed the Bergholz Amish from a typical Amish community into one embracing revenge and retaliation.

Q&A with the author

Q: How did you first learn about the Ohio beard-cutting story?

A: I heard about it on various media in September 2011. At first, I thought it was a joke or some kind of misunderstand.

Q: Have beard-cutting attacks happened before in Amish history?

A: This is a precedent. I’m not aware of any forcible beard cuttings in the 325 years of Amish history. It’s the most bizarre thing I’ve come across in my 35 years of researching and writing on the Amish.

Q: How did you get involved?

A: I was contracted in the spring of 2012 by the US Department of Justice to assist in the prosecution. I helped them to understand Amish beliefs and practices. In September 2012, I served as an expert witness for five hours during the three-week federal trial of 16 Amish defendants in Cleveland.

Q: Why did you write the book?

A: This was such a benchmark case in Amish history. I wanted to understand it better and also document it for historical purposes. I also aimed to gather together all the pieces of this puzzle—scattered by the media over two years—into one coherent narrative. I was also curious about the background of the Bergholz Amish. Who were they? How were they transformed from a peace-loving group into a violent one? Were they really Amish?

Q: How did you answer that question in the book?
A: I provide an abundance of evidence—in fact, more than two dozen ways—that illustrate how the Bergholz clan strayed from orthodox Amish faith. Throughout the trial, they maintained that they were Amish. They still use horse-and-buggy transportation and dress Amish-like. Of course there are no laws that prevent any group from claiming the Amish brand. In my judgment, they are not Amish, at least not according to any conventional standard of Amish belief and practice.

Q: Why did the US Department of Justice become involved in what might appear to be a petty Amish quarrel?
A: There were nine victims, 16 offenders, and five different attacks in various counties. It would have been difficult to undertake multiple prosecutions in different counties for a host of reasons that I explain in the book. Because the attacks could be considered hate crimes and because they involved interstate commerce, the federal government prosecuted the offenders under the 2009 Shepard-Byrd Hate Crimes Prevention Act. The jury convicted the 16 defendants on 87 different criminal counts.

Q: What surprised you most about the story?
A: The defendants appealed their convictions to the US Court of Appeals for the Sixth Circuit in Cincinnati. In the spring of 2014 the national Anti-Defamation League pulled together a coalition 40 different groups vigilant about civil rights abuses. These groups filed a friend-of-the-court brief urging the appellate court to uphold the convictions. The coalition groups view the Amish convictions on federal hate crimes as a benchmark case that is significant for other Americans who might be attacked because of their religion, sexual orientation, race, gender, nationality, or disability.

Q: What is the most important takeaway of the book?
A: The sad irony is that the hate crime convictions of some formerly pacifist Amish have helped to reinforce the long-standing American tradition that citizens are free to practice their religious faith without fear of being attacked by those who may deplore their religion.

Are the Amish Defendants Really Amish?

Why the Appellate Court Reversed the Hate Crime Convictions

Why This Case Matters

Don Kraybill in The Huffington Post: Is Beard Cutting a Hate Crime?

Don Kraybill in Time Magazine: "Hate Crime Laws: What the Amish Beard Cutting Case Means for the Rest of Us"

Don Kraybill quoted in The Atlantic: "Violence Among the Amish"