The Department of Chemistry and Biochemistry offers a number of awards and scholarships to our students and alumni: 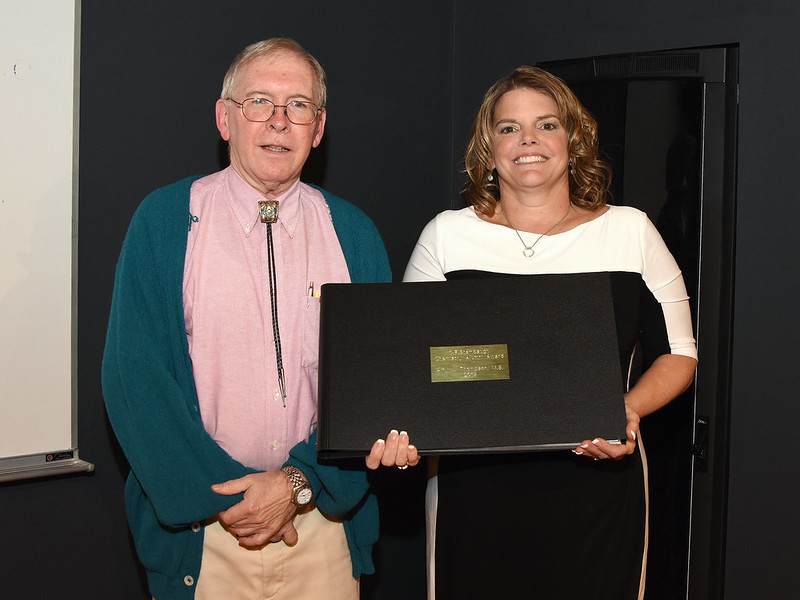 The Oscar F. Stambaugh Outstanding Alumni Award is presented to a graduate of Elizabethtown College in recognition of distinguished professional contributions in chemistry or medicine. It is given in honor of Dr. Oscar F. Stambaugh for his many years of service and leadership in the Department of Chemistry.

This award is given to the first-year student who distinguishes him- or herself in general chemistry. The student receives a copy of the CRC Handbook of Chemistry & Physics, donated by Taylor & Francis, publishers of the handbook.

This award is given to a chemistry major who has demonstrated outstanding performance in the two-semester organic chemistry sequence. The student receives a certificate from POLYED, a consortium of groups interested in polymer education.

This award is given to the top student in analytical chemistry. A stipulation of the award is that it be given to a student who is completing the third year of courses. Since analytical chemistry is normally taken in the second year at Elizabethtown, this award usually reflects performance in the previous year. The student receives a year's subscription to Analytical Chemistry, donated by the Division of Analytical Chemistry of the ACS.

This award is given to the top student in inorganic chemistry. The student "should have future plans that include a career in chemistry". The student receives a certificate and letter of commendation from the Division of Inorganic Chemistry of the ACS.

Each year, the Southeastern Pennsylvania Section of the American Chemical Society recognizes an outstanding senior chemistry major from each of the colleges in the area it serves. These awards are presented at the Whalen Memorial Education Night meeting. Following the introduction of each award recipient to the professional chemistry community, she/he is presented with a copy of the Merck Index, donated by the local section.

The A. C. Baugher Chemistry Award was established in memory of Dr. A. C. Baugher, Professor of Chemistry for 19 years, Dean of the College for 13 of those years, and ninth President of Elizabethtown College, serving in that capacity from 1941-1961. The award is presented to a senior chemistry major who has demonstrated outstanding academic performance. Tangible evidence of the award takes the form of a check for $250, the funds being provided by an interested donor.

This award is given by the student affiliates chapter of the ACS to a deserving chemistry major. It is normally given to a student in the sophomore year, although exceptions are allowed.

Awards for presentations at the ISC Conventions:

Each year, the Intercollegiate Student Chemists holds a convention at which students present their research in oral presentations. Presentations in each of the areas of chemistry are judged and the two best presentations are recognized with award certificates. Elizabethtown College has received its share of these award over the years.

This scholarship is presented to a deserving chemistry major in recognition of outstanding academic performance and financial need.

This award was established in 2011 by the faculty of the Elizabethtown College Department of Chemistry and Biochemistry in order to recognize outstanding achievements of one student in Biochemistry lecture and laboratory courses.

This award is presented to a student who has achieved an outstanding level of performance in Physical Chemistry and who has demonstrated an aptitude for the subject.

Financial Aid at Etown Our financial aid office works with all accepted students to make an Elizabethtown College experience attainable. Learn how we provide more than $33 million in scholarships and grants to 93 percent our our students.
Elizabethtown College